Highly-regarded Norwich restaurant Thai Lanna has been given a food hygiene rating of zero in its latest inspection by Norwich City Council. 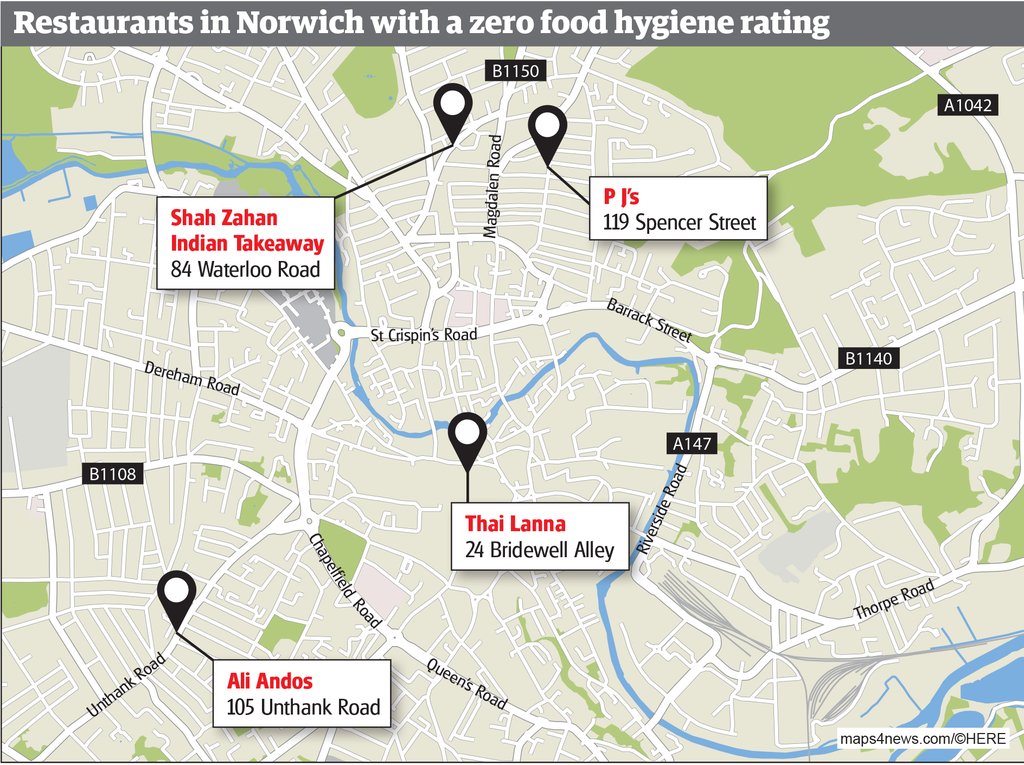 The eatery on Bridewell Alley was visited on April 19 and received the lowest score possible meaning that urgent improvement was necessary. It is one of four premises in the city which are currently rated as 'zero' for food hygiene, the others being Ali Ando's on Unthank Road, Shah Zahan Indian Takeaway on Waterloo Road and PJ's on Spencer Street.

Thai Lanna has a certificate of excellence on Trip Advisor with it being given top marks by customers a total of 43 times. But food safety inspectors found a number of contraventions including:

•The electric fly killer was covered in flies and needed cleaning.

•The base unit under the double sinks was dirty with mildew on its internal surfaces and the doors were miss-aligned or off their hinges.

No one from Thai Lanna was available for comment when contacted by this newspaper.

Restaurants are given time to address some of the most pressing problems notified in food hygiene inspections and can only remain open if food safety officers can see that the issues have been fixed. Businesses then have to wait at least three months to be re-inspected.

One store waiting on a re-inspection is P J's on Spencer Street. The convenience store was inspected at the end of February and manager David Websdale said the main issues the inspectors found were with the hot food counter and paper work systems.

'At the time of the visit we had a hot spot unit selling a variety of hot food and that seemed to be one of our main problems so we have done away with that now,' he said. 'Since we had the inspection our owner has implemented a lot of changes and all the stores in the area now use the same forms and folders.

'We have sorted everything out that was pointed out to us in the inspection and we are now ready to get re-inspected and re-rated.'

Ali Ando's on Unthank Road received their last inspection in November 2015. Among the serious problems found by inspectors were:

•The floor was black with a build-up of dirt in corners, under and alongside pieces of equipment throughout the premises.

•There was no hand wash basin in the kitchen.

•The extraction system and filters were dripping with grease.

Speaking to the EDP in March, owner Ali Bari said they were waiting on a re-inspection and had made significant improvements to its hygiene.

'There were a few little things that weren't done, so they gave me all the details on everything and I managed to fix everything within a week,' he said.

•A container of uncovered raw chicken was being stored on the floor in the storeroom.

•Pipework behind and next to the washing up sink was being held together with string.

•A vast amount of food was being stored at ambient temperature.

Shah Zahan Indian Takeaway said that a food safety inspector has revisited the premises since the inspection and was happy with the improvements made. The takeaway has already put in for a higher rating.

A spokesperson for Norwich City Council said of the inspections: 'Our food and safety team work closely with food businesses throughout Norwich to promote high standards, and offer formal training to individuals and businesses that lead to professional qualifications.'

Air ambulance called and A47 closed after incident