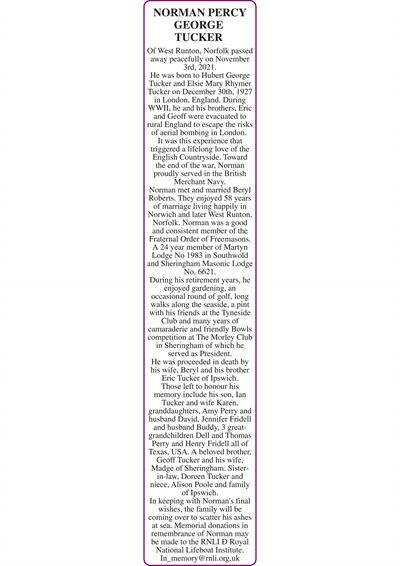 NORMAN PERCY GEORGE TUCKER Of West Runton, Norfolk passed away peacefully on November 3rd, 2021. He was born to Hubert George Tucker and Elsie Mary Rhymer Tucker on December 30th, 1927 in London, England. During WWII, he and his brothers, Eric and Geoff were evacuated to rural England to escape the risks of aerial bombing in London. It was this experience that triggered a lifelong love of the English Countryside. Toward the end of the war, Norman proudly served in the British Merchant Navy. Norman met and married Beryl Roberts. They enjoyed 58 years of marriage living happily in Norwich and later West Runton, Norfolk. Norman was a good and consistent member of the Fraternal Order of Freemasons. A 24 year member of Martyn Lodge No 1983 in Southwold and Sheringham Masonic Lodge No. 6621. During his retirement years, he enjoyed gardening, an occasional round of golf, long walks along the seaside, a pint with his friends at the Tyneside Club and many years of camaraderie and friendly Bowls competition at The Morley Club in Sheringham of which he served as President. He was proceeded in death by his wife, Beryl and his brother Eric Tucker of Ipswich. Those left to honour his memory include his son, Ian Tucker and wife Karen, granddaughters, Amy Perry and husband David, Jennifer Fridell and husband Buddy, 3 great-grandchildren Dell and Thomas Perry and Henry Fridell all of Texas, USA. A beloved brother, Geoff Tucker and his wife, Madge of Sheringham. Sister-in-law, Doreen Tucker and niece, Alison Poole and family of Ipswich. In keeping with Norman&apos;s final wishes, the family will be coming over to scatter his ashes at sea. Memorial donations in remembrance of Norman may be made to the RNLI &ndash; Royal National Lifeboat Institute. In_memory@rnli.org.uk